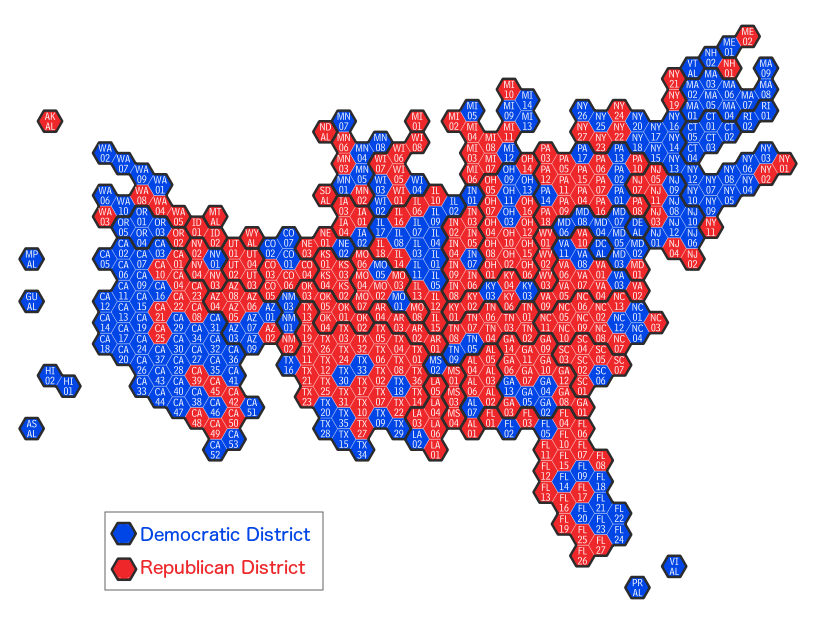 Constituencies and districts come in vastly different shapes and sizes because population density varies across both countries. For example, in the UK, Dumfries and Galloway Co. Const., the 6th largest constituency is 1,602.4 sq. mi. while the smallest, Islington North Boro. Const., is 2.85 sq. mi.[4] In the US, KS-01—the sixth largest non-at-large district—has an area of 57,373.20 sq. mi. compared to NY-15, the smallest district in Congress, with 10.29 sq. mi. The difference in land area between the US and UK constituencies is huge. [5]

A problem that I have encountered in mapping congressional data is that many districts become invisible on web and Power Point images because many districts have very small land areas. For example:

On my US district maps shown here, I can only discern about 300 of the 433 on this map without the need for additional magnification.[6]


The Economist’s map reveals a striking pattern. Compare the election results at right from 2010 (t.) to 2015 (b.). The rise of the Scottish National Party (SNP) becomes obvious, as SNP takes all but a couple constituencies in Scotland. Hadrian’s Wall, Plc now hiring skilled stonemasons.

“Can the same technique be used in the US?” The answer is yes, but two big challenges popped up immediately:

I am pleased to post my shapefile here in a zipped format. It is formatted for the Congressional districts of the 114th Congress as of November 4, 2015 after Speaker Boehner’s retirement.

I’m not the first one to try this. Daily Kos produced an interesting map using five hexes for each district. This allows much more flexibility in maintaining accurate state shapes, even for states with only one district. Daily Kos was in turn inspired by The Guardian, which used nine and sometimes ten hexes per constituency for their 2015 parliamentary map (at right). Unfortunately, as far as I can tell, the Daily Kos map was not provided in a shape file format.

The Daily Kos and Guardian maps are nice compromises between equal area and geographic accuracy. But I still prefer The Economist’s cleaner approach of a single hex per datapoint.

Hex maps provide some advantages to geographically accurate maps. Each district is important because each district has one Representative in Congress. Montana or Alaska’s vote counts the same as NYC east of the Harlem River and south of Fordham. Disproportionate ink for an equivalent datapoint risks misinterpretation of the data. Plotting maps that are geographically accurate obscure these trends because important differences among parties and voting blocs occur between rural and urban areas.

Comparing this to an “accurate” map shows that much much more of the surface area is west of the Mississippi, and so the political influence of the east is hidden in the geographically accurate maps.

Another example is the cosponsorship data shown above for a sample House bill. 247 Representatives have cosponsored H.R. 721, but the distribution of cosponsorships is distorted by the geographic data. More worrying is the fact that the accurate map obscures the lower number of urban districts which are not yet cosponsors of the bill (for example, LA, SF, NYC, Phoenix).

Compare this to the “accurate” map shown below.

The “accurate” map seems to overstate the breadth of support, while obscuring points of where more work is required such as Democrats in NYC and California, and Republicans in the south and Ohio.

[2] The House of Commons is a representative democratic institution in which each of the 650 MPs represents a geographically defined “constituency.” http://www.ons.gov.uk/ons/guide-method/geography/beginner-s-guide/electoral/westminster-parliamentary-constituencies/index.html

[4] Calculated using QGIS and the Ordnance Survey “Boundary-Line”TM shape file available at https://www.ordnancesurvey.co.uk/opendatadownload/products.html. I was very surprised that this data did not readily pop up after a couple Google searches. I did not carefully check the Ordnance Survey map for things like water bodies that occasionally screw up land area calculations on US state and district GIS files that often—unfortunately—include territorial waters and large lakes within district polygons. Dumfries and Galloway Co Const = 415,030.334 Hectares, or 1,602.4 sq. mi.; Islington North Boro Const = 738.038 hectares, or 2.85 sq. mi.. 1 sq. mi. = 259 hectares.

[5] https://en.wikipedia.org/wiki/List_of_United_States_congressional_districts Unfortunately I think this table is a little out of date with current lines.

[7] The hexagon is a good choice. There are three possible Euclidean tilings using regular polygons composed of equal angles and equal sides: equilateral triangles, squares (think: graph paper), and hexagons (think: fantasy role playing maps). See: https://en.wikipedia.org/wiki/List_of_regular_polytopes_and_compounds#Euclidean_tilings for a cool graphics-heavy representation of tilings and polytopes. Equilateral triangles can share sides with three neighbors (not counting the three neighbors with only vertices in common); squares four, and hexagons six. Hexagons meet all their neighbors at sides, while triangles and squares meet half their neighbors at vertices. In board games the question often arises: “Is a diagonal move legal?” The distance from the center of a square tile to the center of a tile located diagonally is 1.4x as far as the distance to the center of a square in the cardinal directions. This leads to greater distortion over diagonal distances than the hexagon. An interesting discussion of the challenges this faces when using isometric tiles in computer programming is here. http://www.gamedev.net/page/resources/_/technical/game-programming/isometric-n-hexagonal-maps-part-i-r747 The distance to the center of all six neighbors of one hexagon is equal. Anyone who played role-playing games in the 1980s and 90s remembers the value of tiled hexagon maps for measuring distances; an innovation attributed to Avalon Hill games at the above link.

If there is an easy way to automate the process of creating hex maps from existing maps, I couldn’t find it. I used Michael Minn’s MMQGIS plugin for QGIS to render my own hex graph paper (Elminister eat your heart out). I fooled around rendering—with paper and pen—the districts within each state in an effort to maintain a suggestion of the state’s shape using hexagons, and then made several drafts combining the 50 state hexagon groups into something suggesting the outline of the United States.

A cool and somewhat hidden feature of the Economist map is the ability to shift between the thematic representation and the geographically accurate map. The animation used is super-cool, and helpful in more precisely locating the geography that each hexagon represents. Click between the map and the hex icons to see.